Its been about 7 months now from when we first got our bee package. 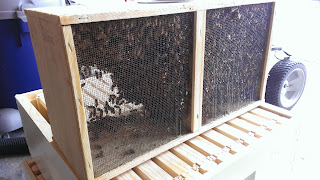 During that time I have learned a lot about mostly the bee anatomy and parasites and diseases that affect them.  I also learned how much I love watching and being around bees. I will regularly spend time standing near the hive to allow the bees to fly around me and land on me.  While I have a small allergy to them I have not had a problem with this hive.  The Italian honey bees that are in the hive are very calm and do not seem to have any problems when I tend to their home.
In the time that we have had the hive we have had to relocate it 2 separate times.  Each move was ~5 and 20 feet from the original location.  The first was due to a construction worker that was working on a house in the lot next to our house threating lawsuit because "some bees" swarmed him while he was operating the back-hoe. 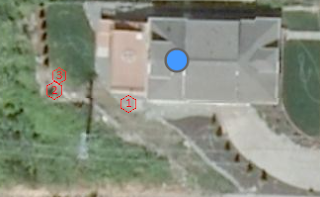 Long story sort this guy was a dick!  He had some incident with wasps in the past and he got all freaked out because some bees were hanging out around his equipment (obviously not the reproductive kind).  Without any knowledge and without visibly watching each of the bees return to the hive on my property he assumed it was from my hive box.  When I asked if he carried an EPIpen in the even he was stung he said "no".  So we will just go down the path of him being a dumb ass.
"Your bees swarmed me..." - Dumb Ass (2013)
While I was not concerned about losing a lawsuit (said bees that were bothering him were not even on my property or on public land).  However I was concerned because the hive was not in a location that technically following the regulations on placement.  We ended up moving the hive to a location which placed it 8 vertical feet above the neighbor property lines to satisfy the placement requirements.  I wish I could see the douche bag construction workers face when he came to the site the next day to see the hive was in a legal placement and not just removed from his baseless threats. 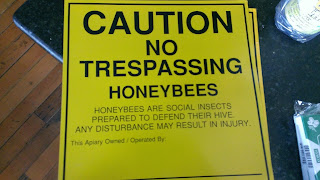 The second move was due to the attack on the hive by a "neighborhood flower thief".  At ~2AM one September morning we heard some screaming ("Wake UP, Wake UP") and the sound of the hive falling off the retaining wall (falling wood).  After working with SPD it was determined that the suspect ignored our "no trespassing" and bee warning signs and continued to pick flowers that we had near the hive.  Something then caused her to knock the hive off the wall onto the ground below. After that the hive survived and still managed to rebuild and increase honey reserves.
The lack spare parts was one of the biggest things that stressed me out.  After the hive attack we had 3 broken boxes, ~10 damaged frames and a damaged lid.  We managed to get things put together good-enough after about 2 hours of the attack.  The undamaged equipment allowed us time to get replacement parts without the hive swarming. 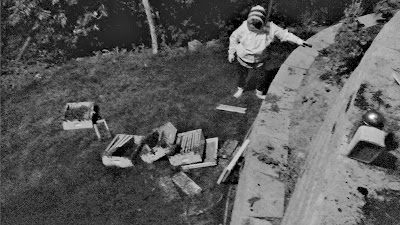 Due to consistent fear of the event re-occurring we decided to move the hive inside our fenced yard.  While not an ideal location due to blockage of direct sun light the bees seem to be happy with it.  And we have not had any additional damage to the hive. 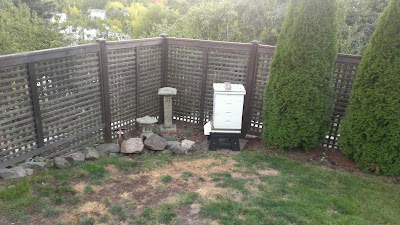 How we did the moves

After talking with friends and Corky from Ballard Bee Company we found the best way to move the hive was a few simple steps.
This move process has worked well so far.  Few days after each move we noticed a large number of the bees go to the old location first then make their way over to the new location.  After the first move we placed a spare box, frames, lid and entrance at the old location to collect lost bees.  Each night and in early morning the box was empty.  We didn't put any temporary home out during the second move.

We managed to get those bees to pay ~2.2 gallons of honey in their first year.  We learned a lot around this mostly that if you are going to give honey away get the person to commit to eating it.  Nothing upset me more than to find out I gave someone honey and they have never ate it.  Well except for seeing the hive smashed across the ground. 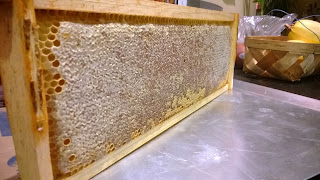 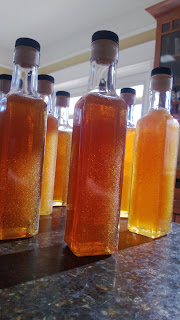 The big lessons over the last year were

We were very lucky this year where we had minimal non-human caused issues with the hive.  I never did expect that I would feel as bad as I do every time I accidently kill a bee but sometimes it is inevitable.
Posted by Mike Poulson at 10:16 PM

LoL Mike! your passion for bees cause you some serious trauma I see!XD Do a top rated essay writing service with your experience! that'll be great to read!

Awesome article. It is so detailed and well formatted that i enjoyed reading it as well as get some new information too.

Amazing Article ! I would like to thank you for the efforts you had made for writing this awesome article.
Thanks for sharing such a nice info.I hope you will share more information like this. please keep on sharing!